Paul Miller a Human outsider (and Fromer Satori) who've came over Gensokyo by Yukari that even he don't know why, he's also an Young Planeswalker thank to his Magic Sword that alowd him talk Power the White Magic made from the White Mana.

Abilities: Planeswalker, White Magic (and Controlld the white Mana), Telekinesis, Own (and thank to some Planeswalker abilites make) Magic Artifact.

Bone as the middle child of Dennis Miller and Susan Miller, In his teenage life with his friend in high school and college, befriending Kelly, Techno, Sore, Ren, and latter Edward. At the time he came over to Gensokyo, he discover his ability to mind read and being an Half-Satori from his mother half and letter become an Full Satori thank to Zero, He latter befrined Ni and latter Max "Laxup" Saibaa who help him to deal with Rho with the help Omega.

Ather that, His Magic Weapon ignite spark and Planeswalking and become an Planeswalkers. Find his friend Edward, Ni, Sore and Max, who also became Planeswalkers by it weapon team up stop the dragon master mind from taking over the world by his Power.

At time thank to an friend help Paul anyone become Human again, But a Full Human.

Feel free to add any Trivia for Paul. 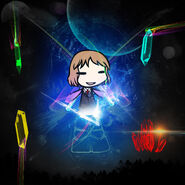 Paul and Sore, Making Some Sparks.
Add a photo to this gallery
Retrieved from "https://walfas.fandom.com/wiki/Paul_Miller?oldid=7623"
Community content is available under CC-BY-SA unless otherwise noted.